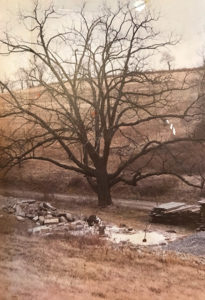 The Black Walnut Tree In Coburn, Circa 1974

Black Walnut Body Works’ humble roots began in Coburn, Pennsylvania. As a teenager, president and owner Eric Dash worked out of his father’s automotive repair shop, named Black Walnut Farm and Garage. It was a tiny space and Eric realized he needed something larger and a shop that was his own. So at 22 years old, in December 1983, Eric acquired a shop located on Axemann Road on the outskirts of downtown Bellefonte, Pennsylvania and opened under the name of Black Walnut Body Works. Several years later, in 1989, the business moved to Water Street, in Bellefonte’s historical district. And finally, in 2002, operations started in the current 12,000 square feet state-of-the-art facility at 1620 Zion Road.

The Water Street shop is still being used for restoration projects and as an auxiliary location to the main shop.

Eric’s father, Anthony Broskley, instilled in him a belief that is still the guiding principle of his business: everyone should be treated fairly, honestly and with respect. And also, that family and roots are the most important foundation in business and life. Eric wanted to keep the identity of his father’s shop name, Black Walnut Farm and Garage, and that’s why he kept “Black Walnut”. The name for both shops comes from the immense, approximately 200-year-old black walnut tree near where his parents built a house in Coburn in the early 1970s.

We stay independent and true to our founding principles and Eric's personal oath of writing an estimate and processing repairs in accordance with standards set forth by the PA State Appraisers Act of which Eric must uphold to be licensed within the state. Often that means he must monetarily subsidize the “actual cost” involved in returning your vehicle to our company standards.

Stop by our state-of-the-art facility and see why you should request Black Walnut Body Works for all your repair needs and most importantly your peace of mind.